About this Christmas Flag Ceremony

In this Christmas flag ceremony the flag remembers what it has experienced on Christmas through the years.

I’m not sure of the origin of this ceremony. It works well at a holiday Pack meeting.

You need to highlight the flag during this ceremony. Put a spotlight on it or have two scouts hold it up, or something like that.

Leader: Many people associate the flag with holidays like the Fourth of July or Memorial Day. But let’s hear some thoughts from the flag about Christmas.

Scout 1: My very first Christmas, I remember very well, I was in a boat with General George Washington, crossing the Delaware on his way to Valley Forge.

Scout 2: By Christmas of 1814, Francis Scott Key had written a famous song about me after the British had burned our White House. That song became our national anthem.

Scout 3: During the Civil War, on the Christmas of 1862 all men were free from slavery. I was really proud that Christmas.

Scout 4: The Christmas of 1917 was a miserable one. During World War I, I was in France, in a cold and freezing battle but I stayed on to give my men hope.

Scout 5: In 1941, General Douglas MacArthur spent Christmas with me in Manila, cheering our men on during World War II.

Scout 6: I’ve also been to Korea, Vietnam, and the Middle East. I’ve even been to the moon. I’ve been almost everywhere in the world, on one Christmas or another, since that long-ago time we crossed the Delaware.

Scout 7: I’ll still be around this Christmas. I might not get as much attention as your tree or the presents. But I’ll still be there, giving hope and courage to the men and women willing to fight for me and our country. 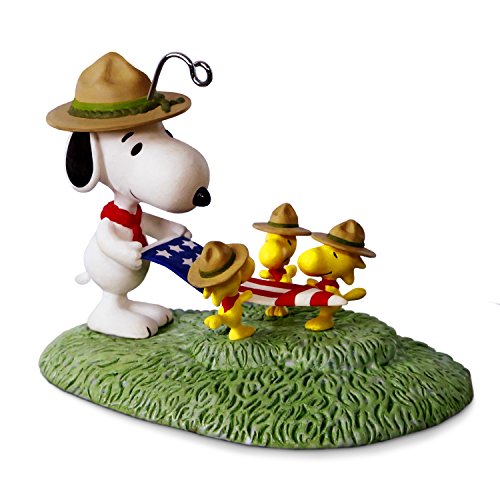 Have your Scouts make some gifts to give away with these easy ideas.

Here are some thoughts for fun ways to participate in that gift exchange.

See even more ideas for your Scouting program during Christmas and the holiday season.