The History of the Scout Law

What Happened to the Cub Scout Promise and the Law of the Pack?

I like the simplicity of the Scout Law. It is brief and therefore easy for youth to memorize. But it covers a lot of ground.

History of the Scout Law

Baden-Powell revised the details in his Scout Law multiple times, but the ideas it contained have remained true over the years. So here is what he thought about the Scout Law:

A SCOUT’S HONOUR IS TO BE TRUSTED. If a scout says “On my honour it is so,” that means it is so, just as if he had taken a most solemn oath. Similarly, if a scout officer says to a scout, “I trust you on your honour to do this,” the Scout is bound to carry out the order to the very best of his ability, and to let nothing interfere with his doing so. If a scout were to break his honour by telling a lie, or by not carrying out an order exactly when trusted on his honour to do so, he would cease to be a scout, and must hand over his scout badge and never be allowed to wear it again.

A SCOUT IS LOYAL to the King, and to his officers, and to his country, and to his employers. He must stick to them through thick and thin against anyone who is their enemy, or who even talks badly of them.

A SCOUT’S DUTY IS TO BE USEFUL AND TO HELP OTHERS. And he is to do his duty before anything else, even though he gives up his own pleasure, or comfort, or safety to do it. When in difficulty to know which of two things to do, he must ask himself, “Which is my duty?” that is, “Which is best for other people?”—and do that one. He must Be Prepared at any time to save life, or to help injured persons. And he must do a good turn to somebody every day.

Get a coffee mug with a spoof of the Scout Law

A SCOUT IS A FRIEND TO ALL, AND A BROTHER TO EVERY OTHER SCOUT, NO MATTER TO WHAT SOCIAL CLASS THE OTHER BELONGS. If a scout meets another scout, even though a stranger to him, he must speak to him, and help him in any way that he can, either to carry out the duty he is then doing, or by giving him food, or, as far as possible, anything that he may be in want of. A scout must never be a SNOB. A snob is one who looks down upon another because he is poorer, or who is poor and resents another because he is rich. A scout accepts the other man as he finds him, and makes the best of him — “Kim,” the boy scout, was called by the Indians “Little friend of all the world,” and that is the name which every scout should earn for himself.

A SCOUT IS COURTEOUS: That is, he is polite to all—but especially to women and children and old people and invalids, cripples, etc. And he must not take any reward for being helpful or courteous.

A SCOUT IS A FRIEND TO ANIMALS. He should save them as far as possible from pain, and should not kill any animal unnecessarily, even if it is only a fly—for it is one of God’s creatures.

A SCOUT OBEYS ORDERS of his patrol-leader, or scout master without question. Even if he gets an order he does not like, he must do as soldiers and sailors do, he must carry it out all the same because it is his duty; and after he has done it he can come and state any reasons against it: but he must carry out the order at once. That is discipline.

A SCOUT SMILES AND WHISTLES under all circumstances. When he gets an order he should obey it cheerily and readily, not in a slow, hang-dog sort of way. Scouts never grouse at hardships, nor whine at each other, nor swear when put out. When you just miss a train, or some one treads on your favourite corn—not that a scout ought to have such things as corns— or under any annoying circumstances, you should force yourself to smile at once, and then whistle a tune, and you will be all right. A scout goes about with a smile on and whistling. It cheers him and cheers other people, especially in time of danger, for he keeps it up then all the same. The punishment for swearing or bad language is for each offence a mug of cold water to be poured down the offender’s sleeve by the other scouts.

A SCOUT IS CLEAN IN THOUGHT, WORD AND DEED. Decent Scouts look down upon silly youths who talk dirt, and they do not let themselves give way to temptation, either to talk it or to do anything dirty. A Scout is pure, and clean-minded, and manly. (Added in 1911) 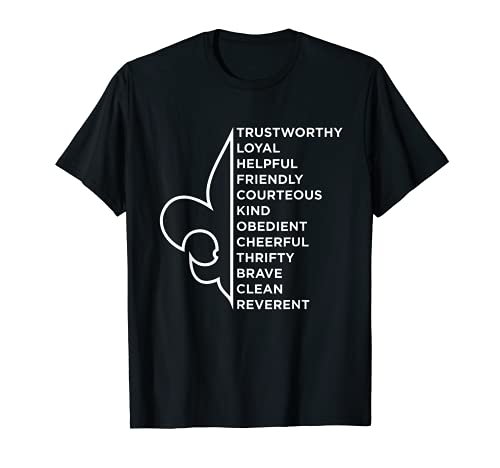 Get a Scout Law T-shirt

What Happened to the Cub Scout Promise and the Law of the Pack?

In 2012, The BSA announced that the Scout Oath and the Scout Law would be used for Cub Scouts and Venturing. Previously, these were only used in the Boy Scout (Scouts BSA) program.  These replaced the Cub Scout Promise and the Law of the Pack as well as the Venturing Oath and Venturing Code.

My Thoughts on One Scout Oath and Scout Law

Personally, I have mixed feelings about this. I think the consistency is good. I did often finde myself veering off into the Scout Oath when I was saying the Cub Scout Promise with the younger crowd. And familiarity with the Scout Law helps them in their transition to Scouts BSA.

But I really have to admit that I have a bit of an attachment to the Venturing Oath and Venturing Code.

I think these really speak to teens in their wording. In particular, the concept of seeking is relevant to teens. They are no longer just following what their parents and other adults have taught them. They are seeking their own way and trying to understand their place in the world. If you have ever worked with young adults, you have probably noticed this.

I have also always liked the phrase “our changing world” in the Venturing Code. For teens, it it not just THE world which is changing,  it is THEIR world. They are leaving the world of childhood and moving to the world of adulthood. Navigating this change is a challenge for our teens, but they face it head on with a lot of courage.

So I moved on to One Oath and Law with the rest of BSA, but I have to admit I miss the Venturing Oath and Code. I thought it was very appropriate for the Venturing program.

For historical purposes, here are the versions which used to be used with Cub Scouts and Venturing.

I promise to do my best to do my duty to God and my country, to help other people, and to obey the Law of the Pack.

The Law of the Pack

As a Venturer, I promise to do my duty to God and help strengthen America, to help others, and to seek truth, fairness, and adventure in our world.

As a Venturer, I believe that America’s strength lies in our trust in God and in the courage, strength, and traditions of our people.
I will, therefore, be faithful in my religious duties and will maintain a personal sense of honor in my own life.
I will treasure my American heritage and will do all I can to preserve and enrich it.
I will recognize the dignity and worth of all humanity and will use fair play and goodwill in my daily life.
I will acquire the Venturing attitude that seeks truth in all things and adventure on the frontiers of our changing world.

Eagle Scout’s Mother Illustrates Cards for Eagles and Crossing Over

When Pat Achilles’ son Tom earned his Eagle rank in 2012 she drew him a special card of congratulations. She has also has Scout cards for Cubs that are Crossing Over into Scouts, packs of notecards that make great gifts for Scout leaders, Eagle thank-you notes and a downloadable Eagle Court of Honor Invitation. Read more.

How the Scout Law compares to the Ten Commandments

This article gives some perspective on how these guiding principles compare. This provides another interesting look at the Scout Law.

Learning the Scout Law will be more enjoyable with a Scout Law game. This game helps Scouts learn all twelve points of the law in order.

A Scout is Reverent. This Scout Law prayer incorporates the twelve points of the Scout Law.

This word search puzzle would make a fun warm up or gathering activity for any meeting focused on Scout basics such as the Scout Law. Feel free to download and use this printable.