Audience participation activities inject a little interest and fun into Pack meetings. Too much sitting makes Cub Scouts fidgety. So get them (and their parents) to stand up and participate in this activity.

This a story about the cold winter when Paul Bunyan found Babe the Blue Ox. A few words and names are repeated throughout the story. Your audience will be divided into groups and assigned a word or name. Whenever they hear it, they must say something – loudly and with enthusiasm – and do an action. Cub Scouts usually enjoy these “action stories”. 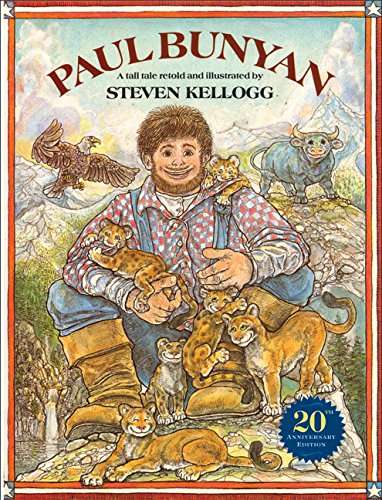 Divide the audience into four sections and give them these instructions:

Now read the following story. When you get to a _____, pause so the group can do their sound and action.

During that cold _____ winter Paul Bunyan _____ went out walking. He heard a sound coming from the blue snow. He dug around a little and found a tiny ox. It was completely blue. So Paul Bunyan _____ took the little ox home with him and he named it Babe the Blue Ox _____ .

Thank you thank you for all your ideas on folklore. Your shortened versions of these stories are perfect! Thanks for sharing and for the cute activity idea for Paul Bunyan.

Thank you so much. I did this with my Bear group and they just loved it! What a fun way to learn about Tall Tales!

Thank you so much for sharing these ideas! I’ll be doing this one with my bears tomorrow and I just know they’ll love it!

This is great! I know my boys LOVE the participation games, and this is a great way to talk about the tall tales.