A Question about Inactive Scouts

Should Inactive Scouts Be in a Patrol?

What Do You Think?

How Many Count as a Patrol?

Help! My Son Doesn’t Want to Be a Scout

What Is Active Participation?

A Question about Inactive Scouts

Mike sent in this question:

We have a large Troop of about 125 scouts and about 14 patrols. We recently tried to do patrol leadership elections but did not have enough scouts present to elect anyone. Most of our really active scouts are already in a leadership position or have already been in one. Any thoughts on how to organize our patrols?

One thought we had was to have them be really big like 20-30 scouts so that at any given meeting or outing we would end up with a patrol of a more reasonable size. However what I really feel like we are doing is addressing a symptom of an overall participation problem as most outings have 40 or less scouts on them (some get cancelled due to lack of participation – really with 125 scouts that seems off).

The Troop has always had a lot of activities going on and let Scouts choose but as a result we are very adult lead and I want to change that but if I can’t get patrol leaders elected and them to start acting like patrols it is a hard change to make.

Should Inactive Scouts Be in a Patrol?

We have had to deal with the problem of inactive scouts and patrols also. We actually have a separate patrol for our completely inactive scouts. These are the ones who are still registered with the troop but don’t come to meetings or outings at all.  A more difficult question is what to do with the minimally active scouts – the ones who only show up occasionally. They need to be in a patrol for the  activities they do participate in, but if you have too many in one patrol, you end up with a patrol with only three or four “regular” members.

We have somewhat left it up to the patrols. One of our patrols has six members, but only three show up on a regular basis. But they are close and like their patrol the way it is. On campouts, they sometimes team up with another patrol (usually as a form of mentoring the newer Scouts) for purchasing food, cooking, etc.. The other option the scouts have tried is to have a dozen or more in a patrol. This leads to higher numbers for activities, but can be difficult for the patrol leader to manage.

The reality is that many of our scouts are really busy. They are involved in sports, theater,band, clubs, and attend college prep schools where they get three or four hours of homework each day. They enjoy scouting, but often don’t know from week to week if they will be at the meetings.   Sure, they might have too much on their plates, but I feel the program should be available to them. All of these things they are doing are good activities. But it does make it difficult to use the patrol method when they are only there 15% of the time.

What Do You Think?

Readers, have you experienced this problem? How do your troops handle inactive scouts? Add your comments at the bottom of this post. 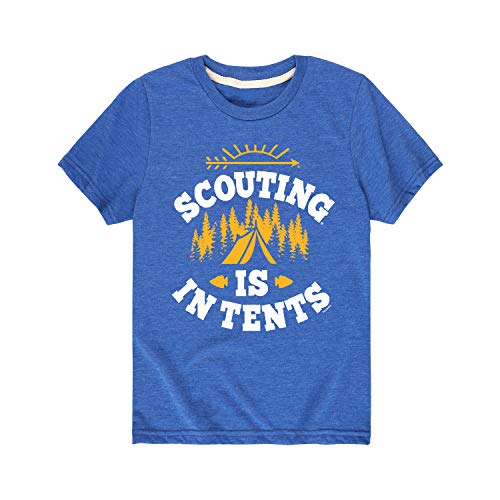 Get a Scout shirt: Scouting Is In Tents

How Many Count as a Patrol?

Karen asked this question about how many count as a patrol: “How many from a Patrol does there need to be to qualify as doing “anything” as a Patrol?”

Help! My Son Doesn’t Want to Be a Scout

A reader’s son doesn’t want to continue in Scouts BSA: “I have tried to make it sounds really cool, he’s got friends moving up and friends in a troop now but it doesn’t seem to make a difference. I can’t force him so am I doomed to this disappointment?”

What Is Active Participation?

Active participation in the Scouting program is required for advancement. So Scouts who are not participating in patrol activities might have difficulty advancing. See section 4.2.3.1 of the Guide to Advancement for details.

The key here isn’t the numbers, but how they are handling them.

The problem lies in the original statement/question. They are adult led.

125 Scouts and they can only get 40 to go on an outing, but make excuses about this, that and the other thing about having low numbers?

Train ‘Em, Trust ‘Em, Let ‘Em Lead…once you get that going, numbers will rise for outings and weekly participation, as well as getting leaders to step up.

Start with TLT, then send some Scouts to NYLT. Get the PLC to start setting the program.

There really are no excuses here, as I see it. The troop is adult led, as stated, and starting there will be the first steps in curing their ills.

Shawn’s answer seems to be a bit simplistic. Yes, some Troops are run better than others, but mostly they are a product of their environment. Backing the leaders out of the Troop is not the answer. If Scouts are led by adults at home, they will tend to expect the same at the Troop. I find it is more often a symptom of the community in which a Scout lives, and chances are the friends that he brought into the Troop are similar… “Birds of a feather flock together”.

In the long run, we’re usually gonna experience the 80/20 rule. Meaning 80 of the work is done by, and 80% of the consistent attendance, etc. is accomplished by the 20% that is really interested.

Yes, I have found NYLT to offer a positive focus to a select few. And, I have found “our” TLT to offer positive training to a little bit larger group. But, ultimately I find it is the family unit that either promotes “accountability” in Scouting, or simply views Scouting as just another activity in a young man’s ever increasingly over crowded schedule.