I recently received a Woodgas Camp Stove to review. This is a self contained camp stove which burns twigs, charcoal, wood pellets, etc. It has a small battery powered fan to draw air. The model I am testing is the small LE model. There is also a larger XL model.

ZM (who is 10) filled the stove with small twigs and some pine needles and lit the pine needles. He was able to get it started with one match. Once lit, we put an open pan with 3 cups of water. It was hot enough for hot cocoa (his favorite camp drink) in less than 10 minutes. He did have to replenish the twigs, but I think this is a pretty good result for a cooking fire made entirely out of tinder, especially on a cold, windy day.

Next, ZM and LC cooked a two egg omelet in a small 8 inch cast iron frying pan. This time they used larger chunks of wood and 4 charcoal briquettes. The omelet cooked quickly. They did not have to refuel the fire.

The fan has two settings, low and high. You can exercise some control over the temperature by changing the setting. The only downside to the fan is that you have to move where the fan is plugged in to change the setting. I was a little concerned about the boys burning themselves while switching the fan, but in fact, the outside of the stove never got hot, at least for the short cooking sessions they did. 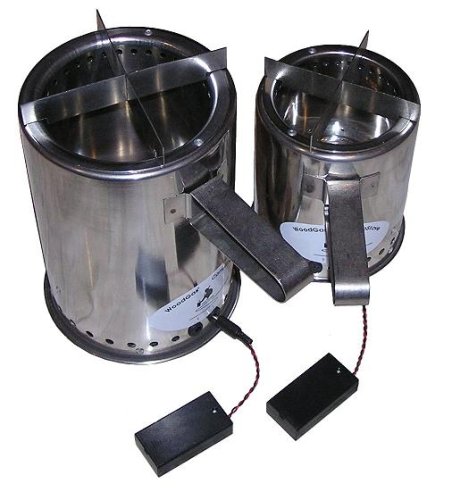 Get a Woodgas Camp Stove

Bottom line – this is a great little stove. ZM and LC had a lot of fun cooking with it, and it was simple enough for a 10 and 12 year old to use without much supervision. The LE model is a perfect size for one or two people. For cooking larger dishes, check out the XL model which burns longer.

One other thing I considered is that our council requires that any youth using pressurized fuel be supervised by an adult with Toasted Chit training standing right next to them. Since this stove does not use gas, they can cook more independently, without an adult hovering over their shoulder.